skip to main | skip to sidebar

The Funeral is This Friday the 13th

Out last show is approaching quickly. 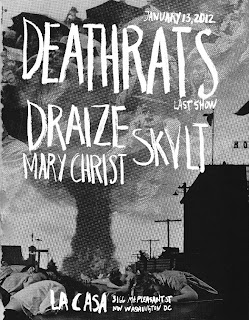 Mary Christ (New DC punk mem. of Hot Mess. All ladies all the time)
Posted by deathrats at 6:23 PM No comments:

It has been a while since we posted an update, but Deathrats have been laying low for a little bit. After about 3 years Deathrats will be calling it a day. Everyone in the band has new bands and focuses that we are focusing our attention on, and although we all still love this band, we feel it is an appropriate time to move on.

We won't be going out without a last hurrah, though. We are currently planning one last tour through the mid-west (sorry to everyone who has asked us to come west or south). We will be hitting the road with State Violence the last week of the year.

Right now we have one show later this month and plans for a last show, but there might be other shows between them. In terms of a last show, it looks like January 13th will be it. Details are still in the works, but hopefully this will be the date. As more details come together we will let you all know.

Here is our tour route.

Thanks for all the support over the years,
Deathrats
Posted by deathrats at 11:58 AM 2 comments:

Deathrats and State Violence are heading to the northeast next weekend. Here are the shows.

August 26th Brooklyn @ Stolen Sleeves Collective 538 Johnson Ave
8pm - 5bux - all ages - no booze, no assholes
DEATHRATS - raging HC from DC. first time back in NY since the release of their new 7" on To Live a Lie. one of the best.
STATE VIOLENCE - Mems of deathrats, sick fix etc etc. first show in NY. raging dbeat hc. should have their new 7" by this!
MUCH WORSE - raging punx from Mnpls, on No Way Records
BRAIN TUMORS - midwest hc
DEATH FIRST - crusty hc punks from here.
TEEN WOLVES - amazing new brunswick punks, one of the best new bands from there in a while!

Give Up is out now.

Our new 7", Give Up, is out and you can buy it here from To Live A Lie Records. We personally don't have the complete records in our possession, but we will have them soon and we will have them at all our out up coming shows. They sound great and Will from TLAL says the covers look just as good. Here is what the finished product looks like: 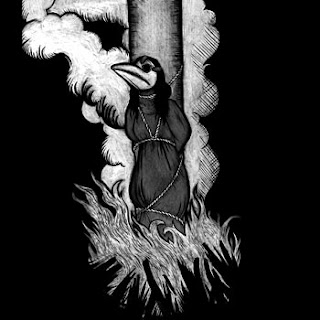 The show on the 23rd is canceled. There was complications with the venue. As bummed as we all are, this will give us a chance to actually have the records ready for a release show. We will keep you all posted.

Greg
Posted by deathrats at 5:43 AM No comments:

Our good friend Anthony Poynter was recently diagnosed with cancer. Anthony has booked shows for almost every band I know and has been supporting DIY punk for years. Please consider donating to offset his medical costs.